You Don't Need Exercise Machines for these Workout Moves

Sorry gym junkies, but those exercise machines that you've been paying to use aren't necessarily the best way to work out those muscles.

Besides keeping you sedentary, most machines tend to isolate only a single muscle, meaning you'll burn fewer calories and gain less muscle mass rep for rep.

But don't quit on your fitness routine just yet. Here are the major exercise machines to avoid at the gym, plus a couple of alternative moves that you can replace them with:

Avoid: Lying Leg Press
Besides the risk of a herniated disk, this machine doesn't really activate stabilization muscles in the hips, glutes, shoulders, or lower back.


Replace with: Goblet Squats
This squat variation involves holding a dumbbell or kettlebell in front of your chest to keep your form in check and the weight off of your lower back. If you want to burn more, go for a lighter load.

Avoid: Seated Leg Extension
Results in torque on the knee joint, which can wear down cartilage and cause knee pain. 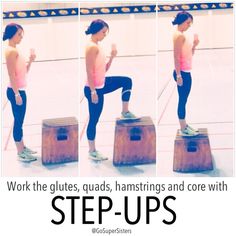 Replace with: Step Ups
A more natural way to train your quads, glutes, hamstrings, and calves without weakening the knees.


Avoid: Seated Chest Press
If one arm is even slightly weaker, the stronger one will end up doing all the work resulting in lopsided muscles.

Replace with: Pushups
Not only does this engage both sides of your chest muscles, they also harness your core muscles for support and balance.


Avoid: Hip Abductor/Adductor
Not only can this machine strain the spine, your knee cap could also risk getting pulled out of place if the IT band gets too tight.


Replace with: Single-Leg Squat
Still the best way to target those inner and outer thighs. Your muscles activate to brace your body and keep you upright, while your quads, glutes, and hamstrings also get put to good use.


Avoid: Loaded Standing Calf Raise
The machine's setup puts unnecessary pressure down on your spine before it ever reaches your legs, which could lead to poor posture and even back pain.


Replace with: Bodyweight Standing Calf Raise
A great way to work out those smaller, stabilizing muscles in your legs is to try this move by standing on one foot during your next set and doubling the weight each calf has to lift at a time.
﻿
﻿