Archaeologists May Have Discovered the Oldest Roman Temple Ever 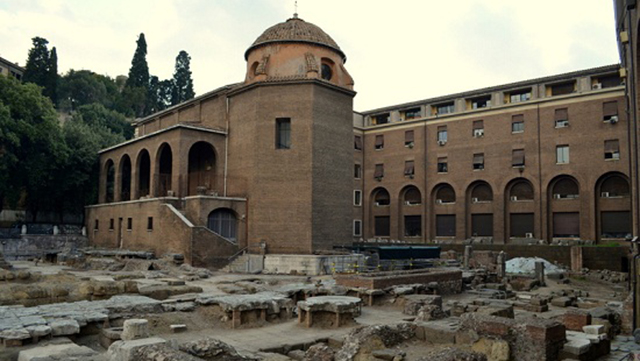 Archaeologists from the University of Michigan may have found the oldest Roman temple in existence. They believe it could be for the goddess Fortuna. The finding will tell us a lot about how Romans built their city back then.

Located in central Rome near the Sant'Omobono Church. Digging—which began in 2009—has been particularly challenging because the temple was built below the water table. NPR says:
The team used heavy machinery to drill a rectangular hole 15 feet deep. A crane lowered large sheets of metal to keep back the soggy soil... The foundations of the temple of Fortuna were visible for only three days — for security reasons, the team could not leave the trench open and it had to be filled up again.

But digging through the city's many layers, archaeologists have learned a lot: Early Rome — a city of high hills and deep valleys prone to flooding — soon became one large landfill as the founders chopped off hilltops, and dumped them into lowlands to try to make the city flatter and drier. And as the city grew layer by layer and more temples were built, Ammerman, the archaeologist says, the Romans encroached on their river, diverting the original waterway.
The temple was located on the edge of the Tiber River, and that means, even back then, Romans were already adept at manipulating rivers to flow in ways that benefited them.