Glow In Dark Rabbits Not Just For Science Fun, But For Curing Diseases One Day (Video) 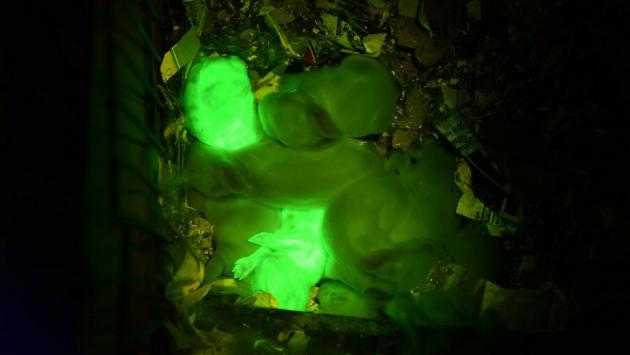 So glowing rabbits don't just exist in Sherlock Holmes reboots. Scientists from the University of Hawaii have collaborated with a team from Istanbul, Turkey to create a couple of bright green lab rabbits as part of an effort to understsand hereditary illness and make cheaper medicine.

The rabbits are part of a genetic manipulation experiment, that the researchers hope will shed some light on hereditary diseases and hopefully lead the way to producing drugs to cure them.

The glowing effect was made by injecting the rabbits with a fluorescent protein from jellyfish DNA to show that genetic manipulation works. Researchers could be injecting beneficial DNA into rabbits in the future so they might be used to produce medicine.

Till then, the bunnies will just be glowing green.

And if you're wondering if it hurts them, don't worry. The glowing rabbits will live long normal and healthy lives. They'll just have to deal with being shun by their other non-glowing rabbits perhaps.

And this is not the first time animals have been made to glow in efforts to look for a cure to diseases. How about the glowing dog from South Korea or the radioactive kitten from Mayo Clinic helping researchers to look for an AIDS vaccine?

Can genetic manipulation save us from diseases one day? Let's hope. [Discovery]