A Glimpse on Traditional Khmer Houses


Traditional Khmer Housing reflects Cambodian culture and tradition. Khmer houses are built depending on need and place in society. The parts of the house reflect the way of life of the residents, and the purpose for which it was built. Sometimes, it is designed to show wealth and power. In olden times, most of the villages are located in the foothills, near the river, and combined with nature to allow the villagers to easily get food and perform their means of livelihood.
The French Colonization started the custom of putting houses parallel with the streets to make it easier for them to manage security and perform tax computations. However, much of the original architecture of traditional Khmer houses stayed the same compared to modern real estate in Cambodia. The houses are designed with the upper level used as a sleeping area and the lower level as the main activity area. This design is still evident nowadays, especially in rural areas.
Basic Cambodian Architecture
A basic Khmer house is typically 2-story. It is built with thick wooden posts and the roof is attached before the walls are installed. The pitched roof is usually made up of dry coconut leaves. It also has wooden stairs and wood or bamboo walls. The house of dignitaries, temples, and palaces has a slightly different design. They are made up of stronger wooden planks made of teakwood and better quality of materials. Palaces and temples also follow a different kind of architecture.
After the French Colonization period, the New Khmer Architecture flourished between 1950-1960. It was led by Vann Molyvann, an architect chosen by King Norodom Sihanouk. In this architecture, western modernism and Southeast Asian architecture were incorporated into traditional Cambodian motifs. This type of architecture is what we see in many real estate property list sites in Cambodia like IPS Cambodia today.

Types of Traditional Khmer Housing
There are 6 types of Rural Khmer Houses. Although it has similarities in terms of design and structure, the difference is seen in how the roof is built.
Pteas Pit house
Phteah Pét is also called Pet house. Depending on location, it is also referred to as Pteas Jorm or Pteas Krorjorm. This type of house has a hipped roof where all the sides slide down with a gentle slope towards the walls. It has no vertical sides to the roof and no gables. A Pet house can expand from 2-5 houses linked by the roofs. Expansion can be done from the back, on the left, or on the right side. Pteas Rongdorl house
Phteah Rông Daol is a type of house with a gabled roof. A gabled roof means that there is a triangular shape intersecting the edge of the roof pitches, and the middle column is slightly larger than the sides. The basic house can be expanded as long as it follows the original structure of how the house was built. Pteas Rongderg house
Pteas Rongderg has open spaces beneath the roof to provide natural ventilation. It is also called Rông Doeung derived from thbal kdoeung, which means a rice mill is being stored under the second awning. This type of house is very common in Battambang province, an agricultural province famous for its rice production. Pteas Kontang house
Kainting is the easiest type of housing to construct. The roof is triangular in shape with roof pitches facing each other. There are 3 or more pillars that support the roof and the walls of the house. The door is built right on top of the stairs. This is the most popular type of house, especially in Kampong Cham, and is depicted in Bayon Temple carvings. The height of the house depends on the location and below the roof, there is almost always a small area used to store crops or valuables. Pteas Khmer house
Also known as Phteah Keung, this kind of house has 2 sloping roofs. The roof shape is called bonnet roof or shikoro in japanese. The house is very easy to build using materials that can be found around the area. Khmer houses that are near the pagodas are sometimes rented by the monks until after they have built their own. 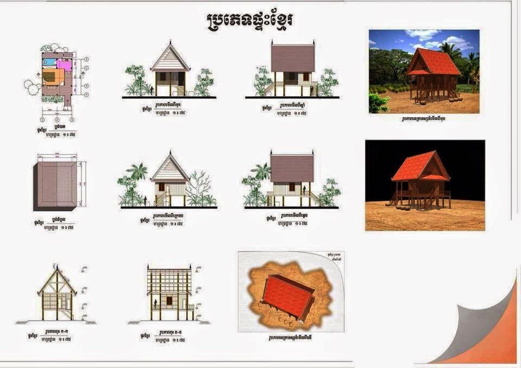 Pteas Kerng house
This is the type of house built for senior officials. It has two overlaid rooftops with 2 heads in the front and the back. Sometimes, there are stairs and doors on each of the four sides of the house, whether the structure demands it or not. Traditional waterside Khmer house
Cambodians rely much on the Mekong River as their primary source of livelihood. During the rainy season, most of the houses along the riverbanks are submerged in water. This is vital to remember if you want to move to Cambodia. That is the reason why these houses are built with stilts about 2-2.5 meters above the ground. The submerged area is used to trap fish, shrimps and other aquatic resources for food.
In dry season when the water subsides, they use the shade below the main house to plant crops and house livestock. It also acts as a naturally ventilated shelter to protect their families from heat. They stay in the covered area during the day and go upstairs to sleep at night.
These houses are built in water, or in anticipation of water. It is built from piles with no foundation. Wood diagonal struts strengthen the piles that are submerged in water.
How Modern Cambodian Houses Compares to the Traditional Khmer Houses
Modern rural houses that are available for rent or sale these days retain the original design and structure of the traditional Khmer houses. It had slightly changed because of the available materials used for construction. Wood is still predominantly used but walls are now made of pre-made concrete foundations with steel reinforcement bars. Windows and doors are still part of the design but it sometimes now comes with shutters. Clay tiles or corrugated tins had replaced the dry coconut leaves that were previously used as the roofing material.
In terms of structure, the open space ground floor of houses are now semi or completely walled in for security reasons. Instead of the open floor layout, it is now divided into rooms for family members. The second floor is usually still made of wood, retaining the original design. However, the upper floor can now carry more weight and sometimes have floor spaces bigger than the ground floor. A stronger building material used on the ground floor. It enabled them to build a bigger upper level (even more floors), depending on the number of family members to reside.
It’s amazing to see the transformation of the architecture of traditional Khmer houses. What is more amazing is the fact that even if the Cambodians are adapting to the modern world, they still retain their traditions when building their own homes.
﻿
﻿