Read The Story Of How The Perfect Coffeemaker Was Invented. 70 Years Ago. 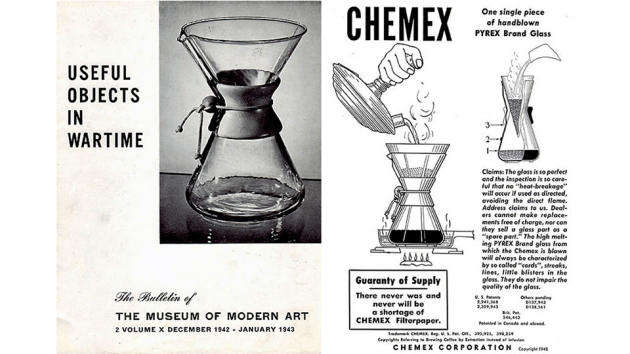 This is the Chemex Coffeemaker. You're bound to recognize it. It was invented by Dr. Peter Sclumbohm 70 years ago. It has not changed one bit simply because it may just be the most perfect coffeemaker.

Shlumbohm is no stranger to great design. He was responsible for the creation of more than 300 patented devices. 20 of those designs are now in MoMA's permanent collection. Here's a story from Collector's Weekly telling how the most iconic Chemex came to be:
A German immigrant to the United States, Schlumbohm received his Ph.D. in Chemistry from the University of Berlin and moved to New York in 1936 (just as Hitler was consolidating his power). Despite his friends’ protests about the dire state of the American economy during the Great Depression, only five years later, Schlumbohm had invented his famous hourglass-shaped brewer; within a few years of securing his patent, the Chemex was available in department stores and through mail order catalogs around the world. Schlumbohm not only wanted to create a device to brew perfect coffee without a trace of bitterness, but also an elegant product that fit the streamlined aesthetic of Mid-Century Modernism.
The piece also discusses how Schlumbohm approached design in general:
Schlumbohm developed his products by stripping appliances down to their essentials and making them work better. In the vein of modern inventors like James Dyson, Schlumbohm didn’t overload his creations with a jumble of new features—he reshaped the industries he entered through the sheer force of innovative elegance. Maybe that’s why the Chemex still feels so fresh; in a world of overly complex and smirking technology, the Chemex remains a quiet anomaly.
The article is well worth a read. Check it out here: [CW]
﻿
﻿