Human beings have been mining raw materials from underneath the ground for thousands of years.
The earliest known mine site dates back 40,000 to 20,000 years according to archeologists. Our ancient ancestors mined metals hidden deep within the earth in Southern Africa.
Mining has always moved with the times. Innovations in technology have driven changes in mining practices, saving lives, improving conditions and extracting resources more efficiently. Here are four of the most essential technological innovations in the mining field. 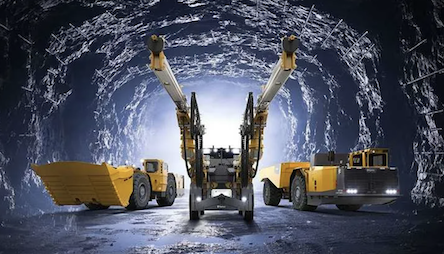 Conveyor Belts
Removing ore from a mine used to involve dangerous and complex rail systems. Many miners were crushed by ore carts during the course of their work, causing horrifying injuries in just about the worst environment imaginable.
Conveyor belt systems have largely made these dangerous underground railways obsolete. Conveyors are fixed in place, making them a great deal safer than carts. They also have the advantage of being able to run continuously, making mining operations far more efficient. Conveyors often lead directly out of an adit into a crusher or off-mine transport system.
Blasting Robotics
Miners would often lose their lives during blasting duties in the past. Dynamite is used in mining operations to dislodge ore and create new passages. It is essential work but inherently perilous. In recent years, robotics has made the job safer in advanced mines. Remote-controlled drones are able to place and remove dynamite without risking a sapper’s life. Explosives underground can cause cave-ins and release pockets of dangerous gas, so the further away a miner can be from a blast, the better. Not all mines have adopted robotics, but the technology is slowly proliferating.
Air Compressors
Getting clean, breathable air to miners working underneath the ground is essential. In the past, ventilation systems were powered by steam engines or even horses, which would be forced to turn a wheel that pushed fresh air through a ventilation tube down into the mine.
These days, powerful air compressors have vastly improved the quality of air that miners breathe. Compressors first came into use in the early 20th Century. These days they are largely powered by electricity or diesel. Compressors typically use a piston to pressurize air system, which can then be used to either power devices or operate ventilation systems. Many mines use compressors for both purposes.
Carbon Monoxide Detectors
Gas is one of the most dangerous factors that miners have to take into account while working underground. Carbon monoxide – known as white damp in the mining community – is especially deadly. As little as 1 percent saturation can lead to death.
Throughout history, miners have developed methods for detecting gas to prevent disaster. Famously, Victorian miners would bring along captive birds (usually canaries) on their shifts. If the bird passed out, the miners would turn tail and get out of the drift or passage they were in. These days, carbon monoxide detectors are carried by most miners. This means white damp poisoning is far less common and has saved thousands of lives beneath the earth.
﻿
﻿