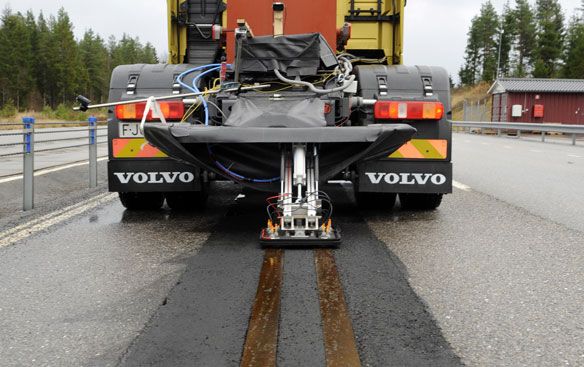 The idea of charging electric vehicles while they're on the move might seem years away, but we're actually already doing it for trams and trains. For example, French cities have completely wireless trams, with a good record to boot.

In Sweden, Volvo wants to apply the same technology to roads - opening up the possibility that people wouldn't have to fear getting stranded by a dead battery. It's one of the major hurdles to people's willingness to buy an electric car. Researchers led by Mats Alaküla are looking at two types of "conductive charging," both where vehicles would stay in continuous contact with the power supply. One method charges using lines overhead; the other, like the French trams, uses two metal bars in the road.

The important part of the second system is "the pick-up", according to Alaküla. The pick up is the connector between the vehicle and the ground. It needs to compensate for drivers who move about the lane, unlike trams that stay in a fixed position.

"If you imagine two lanes, the power system would be in the right lane," he says. "The pick-up keeps in contact with the supply, until you keep moving sideways. Then, the truck will go to the battery. When you go back, it automatically identifies the track, and reconnects."

Alaküla says the road is safe for pedestrians as the system only electrifies sections of the track when vehicles pass at a certain speed. So if you were going to get electrocuted, you'd have to step out in front of a fast-moving vehicle, which sounds like a really bad idea.

The concept is said to take another year before it's taken to a full road.