The COVID-19 pandemic is far from over — but that doesn’t mean we have nothing to show for the past 12 months. Experts have been collecting all sorts of data over the past year in the hopes of gaining more insight into attitudes and behaviors of the population. Unfortunately, one of the most obvious developments after a year of social distancing and large scale isolation has been a marked increase in mental illness. 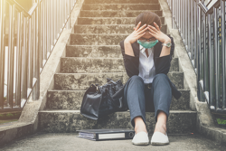 Humans are social creatures, and unending months in which socialization has been largely prohibited have not been kind to Americans’ emotional well-being. Here are some examples of how COVID-19 has psychologically damaged the U.S. population — and some suggestions for how to address mental health concerns moving forward.
More People Are Reporting Symptoms of Serious Anxiety Disorders
Even before the pandemic, anxiety disorders were among the most prevalent mental health concerns for Americans, with about 40 million American adults (roughly 18 percent of the population) suffering from an anxiety disorder every year. However, for the duration of the COVID pandemic, the number of those experiencing the symptoms of anxiety disorders went up, dramatically.
According to one study, the pandemic saw as many as four in 10 U.S. adults reporting symptoms of anxiety or depressive disorder. The most common symptoms reported include difficulty sleeping and eating, an increase in substance use (like alcohol and cannabis consumption) and the worsening of chronic health conditions as a result of stress. It is typical for generalized anxiety disorder to last for at least six months, but as the pandemic stretches into 2021 and threatens to impact 2022, many sufferers may continue to experience symptoms for years to come.
Overdoses Due to Substance Abuse Skyrocketed During the Worst Months
More and more often, substance abuse is being treated as a mental health concern rather than a delinquent behavior, which allows those suffering from substance abuse disorders to reach the treatment they need to develop more healthful lifestyles. Unfortunately, for many in treatment and recovery from substance abuse, the pandemic has been a significant cause of stress and isolation, which has driven many to relapse into abusive patterns that negatively impact their health and wellness.
Not only did substance abuse increase radically during the pandemic, but overdose deaths have spiked, as well. In fact, studies have found that overdose deaths reached record numbers between March and May 2020, during the period of the strictest lockdowns and regulations. Every month after February 2020 brought upwards of 8,000 deaths related to substance abuse, and overdose rates continue to be high into 2021.
Young Adults, in Particular, Have Suffered Mental Distress 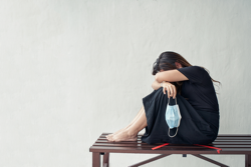 Young adults are currently the group most likely to be diagnosed with any mental illness, but even so, young adults were hit particularly hard during the pandemic. Unlike people of other age ranges, young adults typically have more financial freedom and greater physical health; they are at a liminal place in their lives when education, job training, travel and network building are critical to development. Lockdowns prevented many young adults from enjoying their age and energy — which resulted in an increase in mental distress.
Surveys found that diagnoses for mental illness increased among young adults (those aged 18 to 24) increased along the same lines as the rest of the American adult population, but more dangerous symptoms of mental distress, like suicidal ideation and substance use, spiked in younger adult age groups. Though many young adults could reach treatment, like online therapy in California, the widespread lack of availability of mental health care is a serious risk to the safety and productivity of young adults in the U.S.
The ACA Needs to Provide Mental Health Support
The COVID pandemic has revealed so many weaknesses in America’s healthcare system, but its complete lack of support for mental health is one of the most glaring issues in need of immediate rectification. Because it is unclear when COVID will no longer be a threat — and because it is increasingly obvious that new pandemics are likely to emerge in the near future — it is imperative that U.S. lawmakers make moves to expand the Affordable Care Act to cover mental health treatment for all Americans. Of course, even greater expansion to healthcare coverage could be even more beneficial, now and for years to come.
﻿
﻿