Solar System for your own Home: How they change your energy conservation? 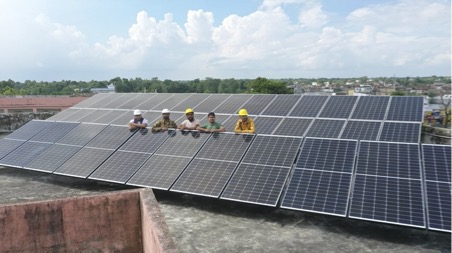 The world turns to renewable energy sources to satisfy its power demands as electricity usage and expenses continue to climb. In recent years, solar energy has become a major renewable energy source as costs have reduced and efficiency has increased.
A solar system is a device that generates electricity using the sun's energy. Solar panels (which collect sunlight), inverters (which convert DC to AC), mounting structures (which keep the panels in place), batteries (to store the additional power generated), and grid boxes. Solar battery system for home is available in a variety of sizes, including 1 kWh, 2 kWh, 3 kW, 5 kW, 7.5 kW, and 10 kW.
Learning about off-grid solar system
Off-grid solar systems are more common and include a power backup. It doesn't rely on the grid to function. Most household appliances, such as fans, televisions, coolers, air conditioners, and water pumps, may be controlled by this system. A 1 kW off-grid solar system, for example, is sufficient for a 2-4 BHK home. However, a 3 kW off-grid solar system may be used to power a 1HP water pump in your home. If you want to run an air conditioner, a 5-kW solar system is the way to go. A 10 kW off-grid solar system should be utilized for business installations such as a shop, clinic, small mill, or petrol station.
It's the most prevalent sort of solar battery system for home. During the day, the solar panel charges the battery and powers home equipment such as air conditioners, refrigerators, televisions, and submersible pumps. When the sun isn't shining, the inverter uses battery power to power your household appliances.
Which appliances can you run on off-grid solar system?
The amount of electricity you can run on an off-grid solar-powered system is determined by the power of the inverter and its efficiency. Most inverters have an efficiency of 80 percent, so if you buy a 3-kW inverter system, you can run up to 2,400 watts of peak power at any given moment. A 3kW Solar System can successfully operate a 1.5 tons inverter air conditioner and a 0.5 HP submersible pump.
What is the cost of installing a solar energy system?
Installing a solar battery system for home costs Rs. 25,000 if you already have a single inverter battery and Rs. 50,000 if you already have a double inverter battery. If you buy a 1 kWh solar system with battery from Loom Solar, it will cost you roughly INR 105,000. It can easily power a three- to four-bedroom home and run for eight to ten hours.
If you buy from Loom Solar, a 3 kW off-grid solar system would set you back INR 2,85,000. It can operate for 8-10 hours and is used to power bigger houses, stores, and workplaces. It is a strong solar system that can readily support the operation of fans, lights, televisions, refrigerators, and other appliances, but not a two-ton air conditioner priced at INR 4,85,000.
Even bigger homes, businesses, and commercial establishments can benefit from a 5-kW solar battery system for home. A 10 kW off-grid solar system if installed with Loom Solar costs INR 9,50,000 and may be readily installed in offices, commercial businesses, and industries. This system has the capacity to produce 50 units each day. The main thing is that you will reach the ROI very fast with saving on your electricity bills.
﻿
﻿