What is the most Beautiful Painting of the Crucifixion?


Whether you see it as tragic or historical, the crucifixion paintings of Jesus Christ have dominated the world of art for centuries. For more than 1500 years, Renaissance artists, among many others, have illustrated Jesus on the cross to bring reverence to the most critical moment of Biblical history.
Jesus's betrayal by Judas, his trial, his gory crucifixion, followed by his thrilling resurrection, have all been immortalized into a painting. The main reason behind painting Jesus on the cross was to glorify his self-sacrifice and suffering as he was nailed onto a board and left to die. His bleeding wounds and bowed head leave an imprint on anyone who sets their eyes on the crucifixion art.
'The Last Supper by Leonardo Da Vinci, 'The Last Judgment by Michelangelo, and 'The Transfiguration by Raphael are some of the most celebrated works that mark the most important moments of Jesus's life. Let us now look at some of the most famous paintings that best depict the crucifixion of the great Jesus Christ! 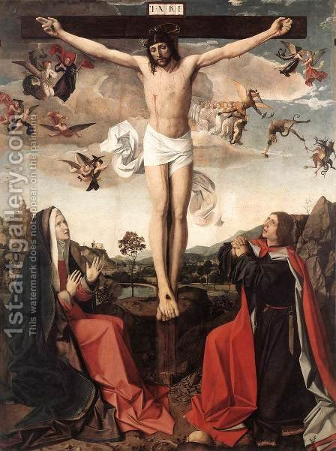 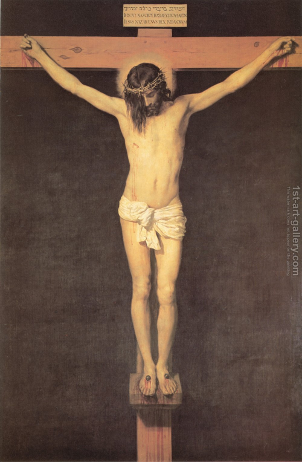 Housed in the Museo del Prado in Madrid, 'Christ Crucified' by Spanish artist Diego Velazquez depicts Jesus's death in a respectful and dignified way compared to other crucifixion paintings. The stark black background and the simple wooden cross allows a viewer to focus their attention solely on the reposeful state of Jesus as he takes his last breath.
Except for the blood running down from Jesus's chest, the wounds on his feet and hands as the nails pierced his skin, the rest of the aura of this painting has a meditative touch to it. The extraordinary feature of this painting is ironically its simplicity and minimalistic essence.
Despite the unconscious state of Jesus, the golden light shining from behind his head signals towards the divine status that he would soon gather after he comes back to life. 'Christ Crucified' inspired many literary pieces, one of them being the renowned poem, El Cristo de Velázquez.
Christ of Saint John on the Cross (1951) by Salvador Dali 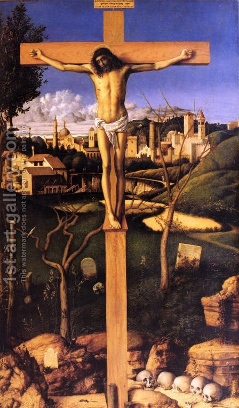 Salvador Dali, a surreal Spanish artist, took on a different path and painted Jesus's crucifixion as never seen before. One can see the triangle formed by the nailed arms of Jesus, with the shadows of the arm completing its shape. Half of the upper background consists of nothing but darkness and a wooden checkerboard.
The lower half of the artwork portrays a dark blue sea beneath the golden sky, forcing us to assume that Jesus is floating in the air. Furthermore, the painting is devoid of any nails or blood, making art connoisseurs question whether the artwork represents the crucifixion of Jesus or his peaceful release from the turmoils of life.
The 16th Century Spanish painting inspired the intriguing masterpiece, 'John of the Cross' inspired this fascinating masterpiece. Dali even claimed that this particular painting appeared in his 'cosmic dream,' following which the artwork came into existence.
The Yellow Christ (1889) by Paul Gauguin Painted by the Post-Impressionist French artist Paul Gauguin, 'The Yellow Christ' presents Jesus Christ on a cross in a much more colorful, artistic, and unconventional manner. Bringing back the glimpses of realism and symbolism, Gauguin painted 'The Yellow Christ' and a similar painting titled 'The Green Christ.'
The painting set is that of 19th Century Northern France, where one can see a yellow-complexioned Jesus crucified on the cross. You can see three women are gathered in prayer below the cross while a man is running behind, presumably to a more 'primitive' countryside.
The use of bright colors, conspicuous outlines, and precise brushstrokes highlight Gauguin's attempt to paint an Impressionist vibe. The lush yellow grass and the vibrant orange trees give the painting optimistic energy despite its tragic subject.
The Lamentation over the Dead Christ (1635) by Rembrandt van Rijn 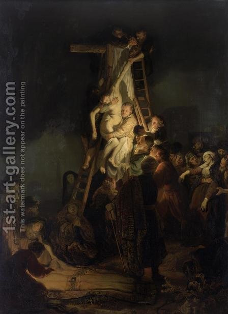 Where every other artist paints Jesus's crucifixion, Rembrandt chose to illustrate the aftermath of the same. The Netherland artist shows Jesus's body being brought down from the cross and held by his mourning mother Mary, along with John, Joseph, and others.
You can see a man climbing down the stairs, depicting the 'deposition' of the trial. And while Jesus lay still in the arms of the mourners, two other men have taken his place on two different crosses. This oil sketch uses monochrome shades, which exquisitely brings out the traumatic events that have transpired.
The Mond Crucifixion (1502-1503) by Raphael 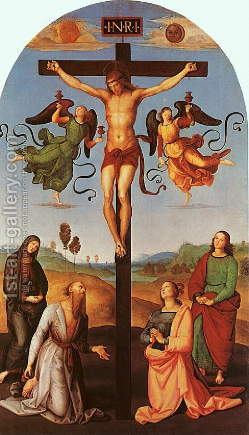 'The Mond Crucifixion,' painted by the Italian Renaissance artist Raphael, shows Jesus on a cross in an extraordinarily mythical and ethereal style. Inspired by the Perugino, this artwork has two angels flying behind Jesus on either side and collecting his blood in gold chalices. The sun and moon above Jesus's head seem to transcend and nullify the concept of time.
Four other figures, Virgin Mary, John the Evangelist, Mary Magdalene, and St Jerome, can be seen below the crucified body of Jesus. The former two are standing with melancholy in their eyes. The latter two are kneeling at the base of the cross, looking at the dead face of Christ.
Conclusion
The ultimate symbol of sacrifice and renunciation, the crucifixion of Jesus, will remain a timeless topic of art and discussion. You can find many of the said perennial crucifixion paintings at the 1st Art Gallery. Make sure that your living room wall has one or two masterpieces with Jesus on a cross. This way, you can discuss the religious shifts and artistic developments across centuries with him by your side.
﻿
﻿