Is Airsoft the Ultimate Military Simulation? 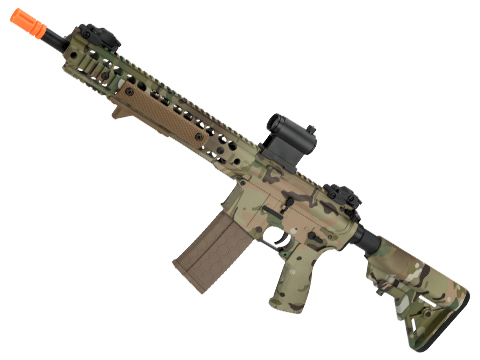 When it comes to military simulation replica toy guns, Airsoft are the guns that are commonly used in these combat exercises that are usually conducted by non-military persons to entertain crowds. The guns look so real that one would mistake them for actual guns. They are not real guns though and they only use spherical plastic pellets instead of real bullets.
It begs the following question: Is Airsoft the ultimate military simulation brand? One would say yes and here is why:
1. Airsoft Is More Realistic
Once you reach a certain age, many replica toy guns fall out of favor simply because they become utterly unrealistic and no longer fascinating to shoot for fun. Airsoft brands are a different case altogether. In case you didn't know, Airsoft produces 2 categories of replica toy gun brands performance brands as well as budget brands. All of their brands offer a more realistic combat shooting experience than any other brands out there. Whether you are 3 or 60 years, you will get a lot of thrill from using an Airsoft gun. If it is a military simulation exercise, those that you and your team are entertaining will be very much excited, watching the entertainment.
2. Upgradeability
Upgradeability is another reason I would say Airsoft is the ultimate military simulation brand. These guns are more upgradeable than many of their counterparts. You can upgrade your gun with an enormous range of accessories, including scopes, sights, fore grips, and even sound suppressors to improve the capabilities of your gun as well as its performance.
3. Airsoft Guns Are More Tactical
Military weapons are tactical in nature and when it comes to military simulations, players want replica weapons that try to mimic the tactical nature of these weapons as much as possible. Airsoft guns can be said to be the ultimate military simulation guns because they are more tactical than many other guns out there. These guns are designed for offensive and defensive use at relatively short range with immediate consequences just like actual military guns.
4. Airsoft Guns are Lighter in Weight Hence Easier to Use
The ease-of-use of a toy gun is an important consideration for every buyer. An Airsoft toy gun is lighter in weight than other toy guns out there, even when upgraded with several different accessories. This makes the gun easier to use than many of its counterparts.
Airsoft guns are the industry standard for military simulation replica toy guns. These guns offer the most advantages offered by replica toy guns for war games. They offer more realistic combat experience, more upgradeability, and they are more tactical in nature. These guns are also easier to use than all other toy guns on the market. These are some of the reasons one would say Airsoft are the ultimate military simulation toy guns.
﻿
﻿