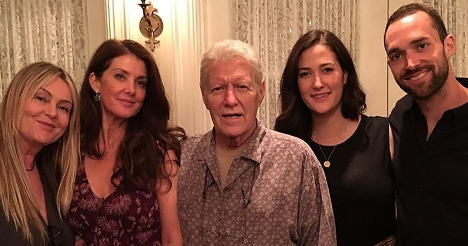 The beloved and well recognized American host Alex Trebek was known for gracing our television set as the host of the iconic game show Jeopardy! He was involved in the syndicated general knowledge quiz game show for 37 seasons and approximately 35 years. Apart from this show, he had also hosted other game shows like Double Dare, High Rollers, Battlestars, To tell the truth, and The Wizard of Odds. World mourned on his death on November 8, 2020.
He had lost 20-month battle with stage IV pancreatic cancer. Apart from his millions of fans, he had left behind his wife Jean and three kids who are mourning a loss much closer to him. No doubt, his family members miss him dearly as he was a devoted father and a husband. In one of the interviews Alex revealed that he might pass away before having a grandchild. This was the one of his wish which couldn’t get accomplished.
He shared an adorable relationship with all three of his children: son Matthew and daughters Nicky and Emily. Just like their father, these kids are also enjoying plenty of success in their own lives.
Let’s know about the nex-gen Trebeks!!
The late TV personality, Alex Trebek got married to his first wife Elaine Trebek Kares in 1974. But due to some unknown reasons the couple got separated in 1981. Before getting divorced and having his own child with Elaine, Alex had adopted Elaine's daughter Nicky from a previous marriage. Even after getting separated from Elaine, he had treated Nicky just like her biological daughter. After 10 years of the divorce, Alex got married to his second wife Jean Trebek in 1990.
Though Alex was a game host whereas his wife was a healer, their profession was different but the couple shared equal love to all three children. His wife was 24 years younger to him but she felt Alex was youthful nonetheless. They welcomed their first child, son Matthew Trebek in the same year. The couple was married to each other for almost 29 years. In 1993, the couple was blessed with the second child “Emily Trebek”. He was diagnosed with the stage IV pancreatic cancer on March 6, 2019. But unfortunately he lost the battle and passed away in November 2020.
Nicky – not biological but loving daughter of Alex

Nicky is the daughter of first wife of Alex, Elaine Callei and surprisingly is not the biological daughter of Alex. Even after his divorce, he has raised Nicky and also gave her his last name. She had shared very compassionate and sensitive relationship with her late step-dad since childhood. Currently, she is an entrepreneur who owns ROCKIDOL clothing where she designs one-of-a-kind custom clothing items "inspired by music, leather, and silver.
She also worked as a production coordinator on Jeopardy! In the remembrance of her late step father, she had uploaded an adorable throwback picture on picture where Alex is pointing his arms in the air. In the caption she had mentioned “It’s been 3 months [since my dad died] and rather than post something sad, I #choosejoy”.
Matthew – Alex’s first biological child 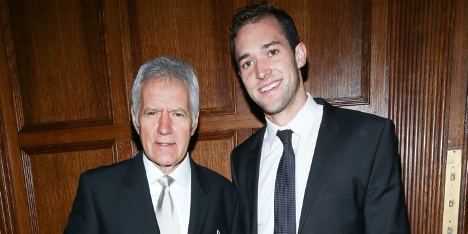 Matthew Trebek is the first biological child of Alex Trebek and Jean Currivan. He was born on February 3, 1991 and raised in Los Angeles, California, USA. He has pursued his elementary education from Campbell Hall where he played football, baseball, and soccer. For higher studies, he was enrolled to Fordham University from where he earned a degree in Communication and Business Administration degree. He also attended National Bartenders to polish his skills and gained expertise as a mixologist.
He has established his name in the hospitality industry and started his North Harlem Mexican restaurant called Oso along with his friend Nodar Moshiashvili. It is known for serving the best Mexican street food in the town. Previously, he has worked in other industries such as music, beverages, graphic design, and food. Initially his idea of starting his restaurant was not appreciated by his father but he had proved his father wrong by taking his business to heights and expanding it.
Emily – the youngest child of Alex

Emily Trebek is the only biological daughter of Alex Trebek and Jean Currivan. She was born in the year 1993 and is the native of Los Angeles. She attended Campbell High for schooling along with her elder brother. For further studies, he had joined Loyola Marymount University. Rather than following the footsteps of her father, she had pursued her career in design and architecture. She works as a real estate agent who buys and sells properties. She owns a $1 million house and $1.5 million home in West Hollywood and Culver City, respectively.
There is no doubt that children of Alex are just as awesome as he was. They also possess the same good looks and hard-working attitudes which proves that Trebek clan is seriously a powerhouse.
﻿
﻿