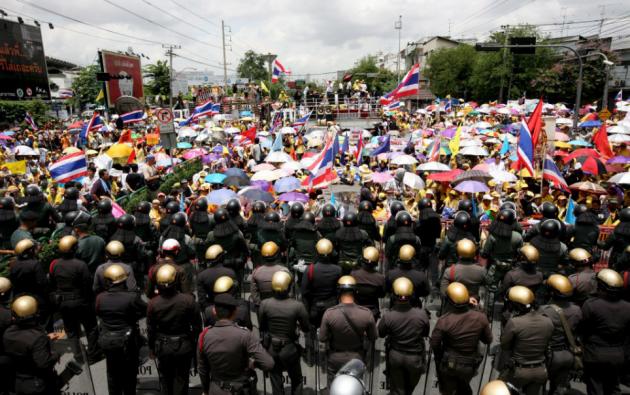 Thai soldiers sprayed automatic weapons fire and threw tear gas to clear anti-government protesters from a major intersection in the capital in the pre-dawn darkness Monday, with at least 70 people reported injured. Demonstrators responded by hurling at least one gasoline bomb at a line of troops.

Monday's clash marked a major escalation in the ongoing protests that have roiled this southeast Asian nation. The skirmish came a day after the country's ousted prime minister called for a revolution.

While the government has declared a state of emergency, protesters controlled many streets in the capital Bangkok. They had earlier commandeered public buses and forced military vehicles to halt, in one case climbing on top of two armored personnel carriers, waving flags and shouting "Democracy."

A mob of the red-shirted protesters smashed cars carrying Prime Minister Abhisit Vejjajiva and his aides on Sunday.

Parliament appointed Abhisit in December after a court ordered the removal of the previous pro-Thaksin government citing fraud in the 2007 elections. Thaksin supporters took to the streets in protest, and their numbers grew to 100,000 in Bangkok last week.

Monday's clash began between 4 a.m. and 5 a.m., as troops in full combat gear advanced to disperse the protesters, who were occupying a major junction, according to witnesses.

The soldiers fired hundreds of rounds from their M-16 automatic rifles, with Associated Press reporters saying most appeared to have been aimed over the heads of the protesters. The reporters saw protesters throw at least one gasoline bomb which exploded behind the army line and tear gas floated across the eerie dawn scene.

At the nearby Century Park Hotel, foreign tourists were seen rushing into taxis and heading for Bangkok's international airport.

Dr. Chatri Charoenchivakul of the Erawan Emergency Coordination Center said at least 70 people were injured, most of them from tear gas, while two soldiers and two civilians suffered from gunshot wounds.

In another incident, the official Thai News Agency said three grenades, believed to be fired from an M-79 grenade launcher, landed inside the compound of the Constitutional Court. One exploded, causing minor damage, and the other two failed to explode, the report said.

Monday marked the beginning of the Thai New Year, normally the country's most joyous holiday. The Bangkok municipal government canceled all its festivities, but despite the rioting many Thais and foreign tourists began engaging in the ritualistic water throwing and general partying.

But in sharp contrast to the usual revelry, protesters set fires Monday morning that were still burning 1-1/2 hours later and retreated into side streets near the Din Daeng intersection, where there is an on-ramp to the main expressway leading north from the capital.

The clash appeared to be an isolated one, taking place several miles away from the main encampment of thousands of protesters outside the prime minister's offices.

Police Gen. Vichai Sangparpai said up to 30,000 demonstrators were scattered around the city. Police vans at some intersections were abandoned and looted. Protesters used buses to barricade several major roads.

Ousted prime minister Thaksin, regarded by most of the protesters as their leader, called for a revolution and said he might return from exile to lead it.

Thaksin fled the country last year, before a court convicted him in absentia of violating a conflict of interest law.

"Now that they have tanks on the streets, it is time for the people to come out in revolution. And when it is necessary, I will come back to the country," he said in a telephoned message to followers outside Abhisit's office.

The message was broadcast over a video link projected on giant screens and relayed on supporters' Internet sites.

Political tensions have simmered since Thaksin was ousted by a military coup in 2006 for alleged corruption and abuse of power. He remains popular in the impoverished countryside for his populist policies.

His opponents _ many in urban areas _ took to the streets last year to help bring down two pro-Thaksin governments, seizing Bangkok's two airports in November for about a week.

The emergency decree bans gatherings of more than five people, forbids news reports that threaten public order and allows the government to call up military troops to quell unrest.

Sansern, the army spokesman, said soldiers and police were being moved to more than 50 key points in the city, including bus and railway stations.

He said the military presence was not a sign of an imminent coup _ a common feature of Thai political history.

Protests were also reported in several provinces of northern and northeastern Thailand. The protests could prompt the military to intervene _ a high possibility in a country that has experienced 18 military coups since the 1930s.